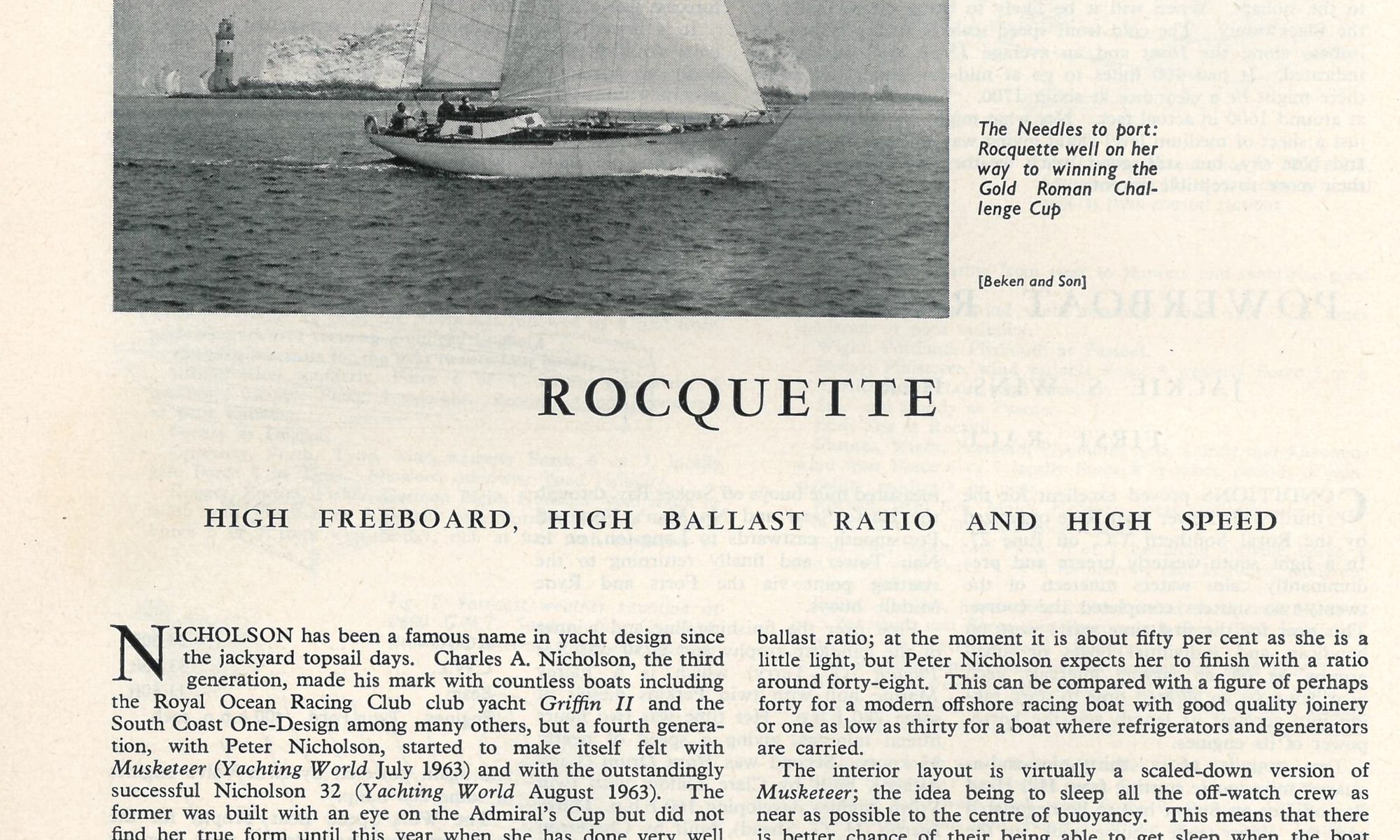 Following of the first page….

High freeboard, high ballast ratio (50%), a flush-deck, the boat also had the highest beam (10.85ft) compared to the 30.5ft (30.5ft) long waterline than any previous boat designed by Camper & Nicholsons. The hull has a mixed structure of wood and steel while the planking is double-skinned with spruce (inside) and Honduras mahogany on the outside. The deck is plywood. Solidity and lightness is without any doubt one of the most successful features of the design :

«I believe Rocquette is the strongest ocean racing hull we have built for ten years.»
Peter Nicholson, Yachting World , oct 64.

Cruising convenience however has been clearly overlooked! Rocquette is an out-and-out racing boat. Interior fittings have been designed to take advantage of the weight of crew members not actually on watch when the boat is driven hard in the wind. The berth of the navigator is also double for a better distribution of the weights. As one of the crew-member of the time will said: “We were sailing at eight for the Fastnet Race. Two watches of three people + skipper + navigator. “. No place permanently on the deck for the entire crew. The interior is not too uncomfortable because there is 6ft headroom clear under the beams amidships although Rocquette is only 13 tons and despite the flush deck. This was previously possible only on yachts of 20 tons of displacement.
By winning the Gold Roman Challenge Cup (Round-The-Island-Race) since her launch against a fleet of 325 boats « Rocquette has assured herself of a place in yachting history » (Yachting World, Aug 64). It must also be said that her name comes from that of a racehorse who won everything in 1963, “A female rocket” will tell us her architect !
The boat, skippered by Peter Nicholson, won in 1964 all races in which she was entered. Only exception, Cowes-Dinard where she finished 2nd, but the owner was not on board …
Rocquette was built to “show the flag”  and was also called “ruthless racer” which “sweep all” (Yachting World-Aug 64). In any case, she fulfilled perfectly the role that Peter Nicholson had attributed to her.

At the end of 1964, David J. Maw, famous yachtman and one of the leading owners of the time, will make an offer to buy the boat. “I could not refuse this proposal !” Rocquette‘s father will say. The boat changed her name to Blue Jacket III. She kept her number RORC 2126 that she still has today.
The year 1965 is a year at Admiral’s Cup and during winter, Camper & Nicholsons builds two direct developments of Rocquette‘s concepts. Noryema IV, 33ft at the waterline and Quiver IV, 35ft., almost sister-ships of their model. At the same time, Denis Miller, one of the two owners of Clarion of Wight with Derek Boyer, commissioned Stephens to design a new boat, Firebrand, which with 30ft at the waterline is in the Rocquette category but with less displacement and more beam. These three yachts have clearly evolved from the two previous boats created by Nicholson and Stephens. They constituted the British team and won the 1965 edition of the Admiral’s Cup. These two designs definitively marked the offshore race at this time. Blue Jacket III lacks very little to be selected and finds himself in the reserve team.

Clarion was beaten and the original contract was completed but the duel between the two boats will last a long time, sometimes for the benefit of Clarion. For example at the 1969 Fastnet Clarion of Wight was placed 31st and Blue Jacket III 32nd. Even today, they still compete in the same races. David J. Maw put together a crew that ran in more than forty RORC races until 1971. This was probably to be the last year of the Solent regatta for the boat.
She is sold in 1973, takes the name of Vanity I and little is known of her during this period. She reappears in 1985 in the Mediterranean in Imperia (Italy) once again in the name of Rocquette where she cruised and raced for many years at the hands of several Italian owners before being sold again in 2004. After some restoration work, the boat is again for sale and after doing a few charter in Greece in 2007, finds herself stored on land until 2010. After some time the boat was found in poor condition by her future owner, Yves Tanguy. His aim was to buy the boat and save her, being convinced that to leave the where she would lead to her eventuel death. Rocquette was then initially taken by cargo boat and then truck, passing under the Alps and eventually arriving at the shipyard of Yves Tanguy in Douarnenez in July 2010. She remained in the yard for a two year restoration in parallel with the activity of the shipyard.

«Rocquette is one of the best boats among the many yachts I’ve sailed and I’m very proud of her architecture …»
wrote Peter Nicholson in January 2016.

Yves Tanguy was very keen to take Rocquette to meet up with her father, Peter Nicholson, in the Hamble. This was done in April 2016 and was a real highlight for her new owner. Very quickly the emotion gave way to conviviality, the boat was inspected and memories and photos reappear. The questions too. The next day, Roger and Chris, former crew members of David J. Maw, appear their arms loaded with ancient notices of race and photos. Roger says : « Most of the sailing was competing in the RORC races, which included some memorable races such as 4 x Fastnet, a race from Cork Southern Ireland to Brest in 1970 with Force 9 gusting to force 11 when we came 1st in class 2. This really proved how strong the boat was. A wonderful race in 1968 from Cowes to Lequeitio in northern Spain, across the Bay of Biscay in a Force 6 to 7 westerly, going at 9 to 10 knots. We also came 1st in this race. »
Rocquette gently pulls on her moorings and seems happy with all this commotion on board!